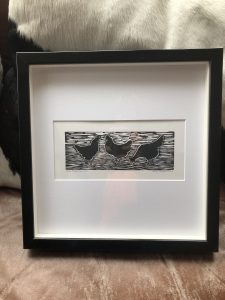 I was struggling to work out what to do for my Christmas card last year. A few years ago, I got my (then) small boys each to draw a king on a small piece of paper which I then turned into a “We Three Kings” card.

The time of doing art projects with the boys for Christmas is long gone. I wouldn’t dream of doing that now! Now, it’s just down to me and my own imagination and effort! I may have lost my willing artists, but the idea of using a Christmas carol was still valid. The idea of using the Three French Hens motif – from “A Partridge in a Pear Tree” seemed a witty and easy thing to translate into lino print. For the card itself, once I was happy with one of the print proofs (and it had sufficiently dried), I painted the white outlines of the outer two hens red and blue respectively. This became the artwork I sent off to the printer to make the cards from.

It worked. And the artwork itself also proved popular with many people who asked me to sell them a copy. So I got busy and produced an edition! I still have a few left. So, what happened to the original card artwork? My good friends Will and Jenny asked me for that. So it’s now in their house.

I also have cute espresso mugs with this motif printed on them.